I’ve gotten several complaints about ads on my blog.

When I set this thing up in 2009, I didn’t know much about the web— I’m an AI programmer, web stuff I do when there’s a reason to do it— and I used WordPress’s free offering, and it worked. At the time, you published a blog post and there it was. No ads.

At some point, WordPress began running banner ads under my essays, without paying me, because I was using the free tier, so fuck that guy. I never saw the ads on my own blog, when logged in, and now I understand why. If WordPress bloggers (like this dumb sap) knew how intrusive the ads were, they’d be less likely to create content.

The banner ads were ugly— and I wasn’t making any money off the damn things— but I was willing to tolerate them… laziness, inertia, not wanting to start over.

This afternoon, I looked at my blog, while not logged in, and saw this: 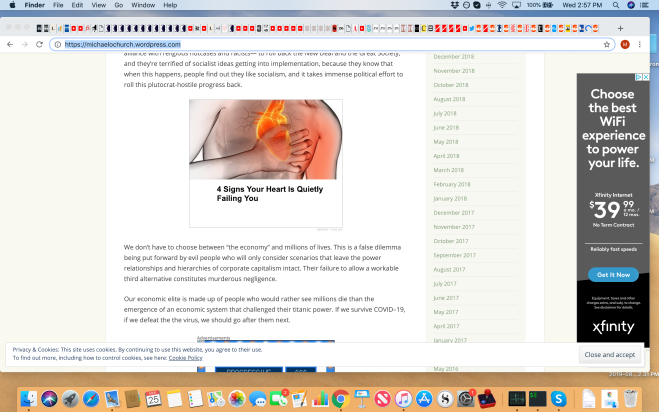 Not just a banner ad, but a block ad, right between paragraphs. A fear-based fake-news ad, on top of that. Fucking garbage, in the middle of my writing.

I never allowed this. I am embarrassed that this piece of garbage ran between two paragraphs of my writing. I am fucking done with this shit.

I would like to rage quit the Web in its entirety. It’s a pile of garbage at this point. Fake news, interstitial ads, egregious memory consumption, and those obnoxious metered paywalls. Social media is an embarrassment. I am so sick of all this fucking garbage, the blue-check two-tier platforms, the personality cults, the insipid drama, and the advertisements for garbage products no one wants and badly-written ad copy no one needs to read.

I am sick of “Free” meaning garbage. Yes, I’ll pay for news— but never in a million years if you punish me for reading more than my “4 free monthly articles”, you rancid shitcunt. Make it free or charge for it; don’t be an asswipe. Stop “giving away” a garbage product in the hopes of someone paying for something better.

Fuck it. Fuck all of it. The Web is a failed experiment and should be shut down.

This blog goes down on April 30.